Ticino is known as Switzerland's sunshine lounge, for its delicious specialities and impressive landscape. But the most beautiful places are sometimes hard to find. Therefore we have prepared some tips for your stay in Ticino, including exciting stories.

Grotto America is a very special place: in the nineteenth century it was a meeting point for many emigrants to set off together on their way to Genoa and then by ship to North America. Today it is a small grotto surrounded by greenery, with an idyllic view of the Maggia. When the weather is fine, the terrace invites you to linger, in bad weather the tiny dining room with fireplace invites you to warm up and enjoy. Via ai Grotti 71, 6652 Ponte Brolla, Tegna, Tel.: 091 796 23 70

Far behind in Val Bavona, in Foroglio, lies the Ristorante La Froda. This small, inconspicuous restaurant not only attracts locals and tourists, but also writers and other artists are inspired by the fairytale surroundings. Among the guests are Mario Rigoni Stern, Robert Schneider, Mario Botta and Nanni Svampa. La Froda has already received various awards for its high-quality food and dishes. Forglio 6690, phone: 091 754 11 81

The old mill is located directly on a natural basin formed by the river of the Peccia Valley, which impresses with its crystal clear water. Every day polenta is prepared over the fire in a large pot, with a variety of cheeses, mortadella and codegotto. You can enjoy these delicacies at the granite tables on the terrace, with a magnificent view of the river. Peccia 6695, phone: 091 755 16 04

From the outside, the Grotto du Rii is an almost fairytale appearance. Decorated with many flowers and bushes the Grotto invites you to enter. As entrance gate to the Centovalli, the Grotto offers regional and seasonal specialities. Surrounded by trees, bushes and flowers you can listen to the splashing of the nearby waterfall on the terrace behind the grotto. Via Cantonale, 6655 Intragna, phone: 091 796 18 61 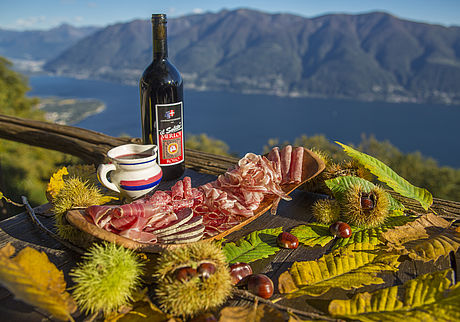 The Valle Maggia is the largest of the three valleys and is formed by the river Maggia, which flows down the valley with thunderous roaring. Grandiose mountains, wild nature and ancient history and culture are waiting to be discovered. All this is mixed with excellent gastronomy in many small grottis.

Also known as the Maldives of Switzerland, the Valle Verzasca is located at the northern end of Lake Maggiore. The stone basins formed by millions of litres of water invite with the crystal clear, greenish-bluish water to a cold refreshment. From the smallest community in Switzerland to the 220m high dam, the Valle Verzasca has just about everything to offer.

The wildest valley in the region is the Valle Onsernone. The southern flank of the valley is covered by dense forest, and on the northern flank there are many small, quaint villages. The almost infinite green of this valley, with its spectacular gorges and rushing white water, seems mysterious. One could assume that exactly for these reasons, young dropouts in the 80's came to the rearmost village of the valley - Spruga - and settled down there.

In all three valleys you will find a well signposted, varied and long network of hiking trails. A visit is a MUST. 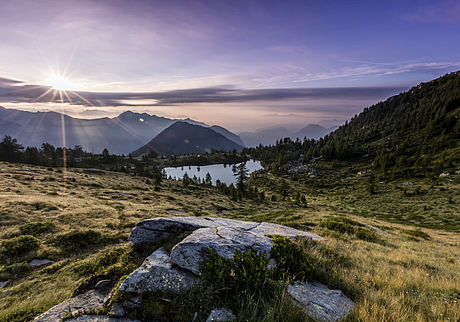